We, the Schoenstatt Fathers

Part of the Schoenstatt Movement

The Secular Institute of Schoenstatt Fathers is one of over 20 different communities belonging to the International Schoenstatt Work and shares with them a common spirituality, history, and mission. The Schoenstatt Fathers exist primarily to serve the branches and communities of the Schoenstatt Movement by offering inspiration, education, and leadership. We work with the other core communities to build up and animate the worldwide work. Some members are also pastorally active in the ministry of parishes, ecclesial communities, and dioceses, as teachers in schools and professors in universities, as well as in social initiatives and works.

On 18 July 1965, our Secular Institute was founded as the youngest of the Schoenstatt communities. Our Institute is of pontifical right. The members are incardinated into the Institute. This means that their appointments are made by the respective superiors. In keeping with their pastoral and community tasks they live in house communities (filiations) or as individuals at their post (externs). The members in the countries and continents are organized into provinces and regions with their own governance structures. The general government has its seat in the international Father House at the place of founding in Schoenstatt near Koblenz on the Rhine, Germany.

At the beginning of 2015 the Institute has 331 Fathers, 104 seminarians, and 41 novices. There are houses of the Institute in Argentina, Austria, Brazil, Burundi, Chile, the Czech Republic, Ecuador, England, Germany, India, Italy, Mexico, Nigeria, Paraguay, Poland, Portugal, Spain, Switzerland, and the United States.

The Institute received pontifical recognition on 24 June 1988 and its Constitutions received final approbation on 22 February 1994. 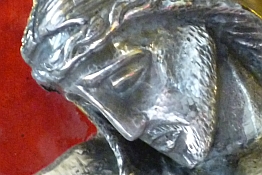 Our cross is red

And it reminds us time and time again that you gave yourself for us, that your heart is open and that you poured out your blood as the price to save our lives, to save everyone’s life.