The first prospective candidates and the first contacts date back to 1992-1993. The first groups of our candidates were staying and studying Philosophy on our behalf at the Claretian Institute of Philosophy in Nekede, Owerri. In September 1997 the pioneers Fr. Alfred Kistler (Switzerland) and Fr. Klaus Desch (Germany) arrived in Nigeria, and a year later, Fr. Roman Haronska (Poland). During the first few years the community stayed in the South East: Philosophy students in Nekede, Owerri (until 2000) and later the Novitiate in Umuahia (until 2004). Fr. Kistler was the superior and rector of Students, Fr. Klaus novice master of the first novitiate, followed by Fr. Roman of the next four courses till 2008.

In 1999, the Community moved to Ibadan, Nigeria in the West, where we have now our centre: study house, novitiate, Fathers House, and the Shrine. In 2002 important decisions were taken: the construction of the Shrine and the formation house were approved. The following year, after the General Chapter, it was decided not to admit new candidates for the next few years (“Admission Stop”) and the responsibility for Nigeria should no longer be in the hands of the Family Council.

On the way towards authonomy

In January 2004, the “Nigeria-Council” was constituted by the Conference of Major Superiors, chaired by Fr. Brügger, former Provincial of the Sion Province. In 2004, the “Victory Shrine” was dedicated. In April 2005 Fr. Peter Chukwuma became the first Nigerian Schoenstatt Father. In 2006, the Father Region accepted the request of the Pater Familias to assume the responsibility for the community in Nigeria, which has led to a slow but steady process of full integration within the Father Region in 2011.

A growing territory within our Institute

20 priests form the first generation of our community in Nigeria; they were ordained between 2005 and 2013. In addition, 5 Brothers are to conclude their theological studies in June 2016, 10 novices will soon complete the novitiate, and slightly more than 30 candidates are spread across the 4 years of Philosophy (before the novitiate).
The Fathers are active in different tasks and in different places: four are engaged with internal tasks of education and the movement, 9 are in Europe (Germany, Rome, Manchester) – in further studies and / or pastoral works – the other 7 are working in different cities in Nigeria in parishes (two are Parish Priests). 4 Fathers are participating in part-time post-degree programmes in various universities. 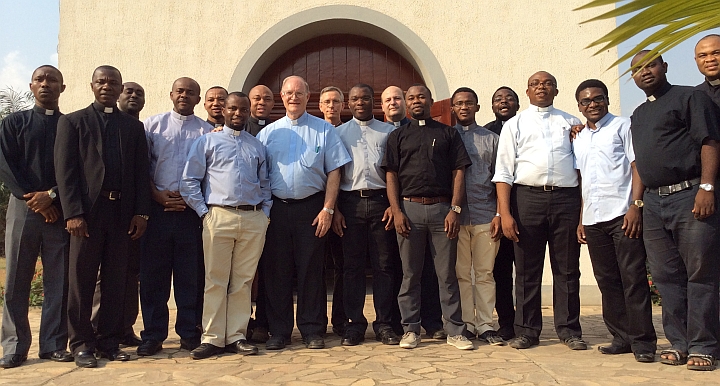 Our address in Nigeria